Originally built in the early 2000's; the chassis was constructed by Simon Hanlon. Raced in the early 2000's it was eventually left without a running engine or working brakes after the original builders of the car left the crew. Additionally the chain used to stop the left rear wheel from bottoming out had been sheared from the chassis.

In early 2014 work started to bring the car back to its former glory.

The old engine had seized; a new engine had been left with the car but it was a 1800CC instead of the 1600CC the gearbox housing had been design work with. The flywheel for the new 1800CC motor rubbed against the bellhousing of the gearbox. With help from Leon's Motors a new bell housing was sourced and installed.

The new engine did not come with an working alternator or a carburetor. Both needed to be purchased for the vehicle.

The car did not have seized master cylinders and with leaking front drum brake calipers. These where both replaced.

In Banana bash 2016 the car ran for the first time in over 10 years. Despite having some electrical problems; and shearing the bolts on the driver side CV joint, the car ran well.

In April 2017 work resumed on the car with the intention of attending Banana Bash 2017. This work focusing on adding a redundant handbrake.

Bad Habit 3 started all races at Banana Bash 2017 and won two trophies in the short and long course. 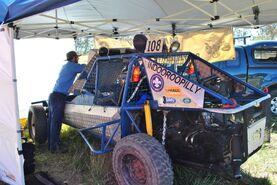 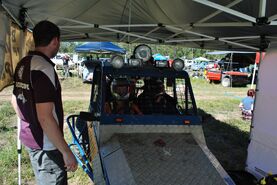 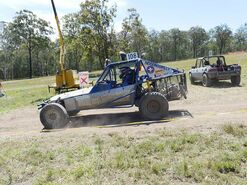 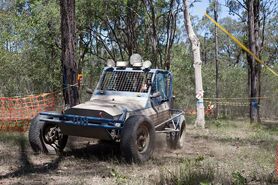 Add a photo to this gallery
Retrieved from "https://qldrovers.fandom.com/wiki/Bad_Habit_III?oldid=2158"
Community content is available under CC-BY-SA unless otherwise noted.